Anger gets a bad rap. It always gets blamed for those explosive outbursts you hear about in the news, road rage, post office shootings, and domestic disturbances. I wouldn’t want to be blamed for all those things. Would you?

Does anger really deserve such a bad reputation? Could it be possible that anger is actually a good thing but it just gets used in the wrong way? Could it be something healthy and productive if used or channeled in helpful ways?

Many people let anger get the best of them, replacing their rational thinking and leading them to do irrational things that are often violent. Anger is held responsible for so many bad things in our society that most people now think anger is completely wrong, not allowed, and a problem if you feel any of it.

Getting Angry Is Human

As an anger management facilitator at Anger Management 818, I had one man say that he had learned helpful tools in my class but he still was getting angry and wasn’t happy about it. I had to remind him that we all get angry and it will be that way for the rest of our lives.

Anger is part of our basic emotional operating system, like our computers, meaning it is a core emotion, along with fear and love. These emotions are primal to us as humans, informing us about how to live our lives and how to survive. Anger can’t be surgically removed but it can be managed and channeled in ways that benefit us and don’t cause harm to others.

In an effort to reframe the bad reputation that anger has gained, let’s understand why anger is one of our core emotions. Anger is energy. It is also a signal that tells us much about who we are and what is important to us.

When we get angry, there is a biological response. Our bodies prepare for fight or flight, with perhaps a raised heartbeat, clenched fists, and tightness in the chest, all gearing up to protect ourselves and continue surviving.

This worked really well when we as humans were living in caves, surviving hand to mouth, and dealing with wild animals potentially attacking us. Now in our ever so domesticated society, we still have caveman aspects to our brains but don’t have those life threatening scenarios on a daily basis.

When our bodies respond so strongly, it’s easy to let that build-up of energy (anger) come rushing out of us, by punching someone or verbally slaughtering another, only to have law enforcement get involved and potentially go to jail, get written up at work, and get court ordered to attend anger management classes. So, before anger gets the best of you, let’s look at ways to better handle it.

Being Proactive Is Key

Anger is best managed by being proactive. This is a very, very important concept in anger management. Being proactive includes having a higher self-awareness that puts you in touch with your own feelings and emotions on a minute-by-minute basis.

Part of this includes beginning to recognize all the emotions that lie underneath your immediate anger response. Anger is a secondary reaction to primary emotions such as fear, sadness, and frustration.

Additionally, being proactive includes using four basic concepts– knowing how your anger works and your anger triggers, using assertive communication, exercising genuine empathy towards others, and managing stress in your life.

Noticing the small beginnings of internal anger allows you to diffuse it sooner, instead of letting it build up and eventually explode. It is much harder to manage and dissipate explosive anger than addressing the initial feelings of it early on.

It also helps to identify and recognize how anger has operated in your life, how it has affected yourself and others, and what building blocks are included in leading up to your own anger responses.

How You Communicate Is Important

Looking at how you communicate with others helps in identifying how changes can be made. Four basic communication styles are commonly used – passive, aggressive, passive/aggressive, and assertive. Recognizing which you use most often can help you begin moving from unproductive ways of communicating to more productive, open, and healthy styles of communication.

This is best accomplished by using assertive communication, which includes clearly stating your needs, being respectful of the other person’s opinion, and using ‘I’ statements.

Speaking from the position of ‘I’ keeps the perspective coming from your own experience instead of starting sentences with ‘you’, which can feel attacking to the other person and lead to defensiveness. Using assertive communication will lead to clearer expression, new solutions, and helpful compromises.

Empathy: Do Unto Others…

Empathy is another important part of anger management. Using empathy starts with recognizing that most of the time, none of us really know what’s going on with the other person and the dangers of assuming we know how, what, or why someone has done or said something. By identifying how each of us would like to be treated in many scenarios, a different approach to understanding others emerges, leading to less reactionary responses.

One approach to using more empathy includes taking a 5 to 10 second pause before reacting and responding to someone. This pause allows you to imagine what it might be like to be in the other person’s shoes and respond with that perspective in mind.

Recognizing how stress builds up in your life and how it affects your own feelings and behaviors helps in managing many of your reactive responses. Some of the ways for one person to manage stress might not be the best way for another person, so it’s ideal that you find specific approaches that work for you.

When one of my clients was getting upset and could feel some aggression coming up, he got down on the floor and did as many push-ups as he could, until he was exhausted. Afterwards, his body felt different, less explosive, and his head was clearer, making it easier to focus on the situation at hand.

He told his wife he would be doing this from time to time and she learned to support him doing it, even in the middle of an argument. By doing so, their communication was more successful and both of them were less aggressive.

By implementing the tools in this article, you can become more self-aware and less likely to have those angry explosions we hear about in the news, on the road, and in the post office.

These are basic ideas, which I build upon in the anger management classes at Anger Management 818. Class participants learn how anger operates in their lives and they find ways to use it more productively. They learn healthier ways to live with anger, rather than letting reactionary emotions get out of hand. 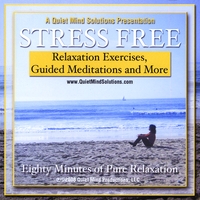 "I love Stress Free! My job as an ER doctor is extremely stressful. Stress Free gives me a place for a quick mental vacation. I absolutely recommend it."